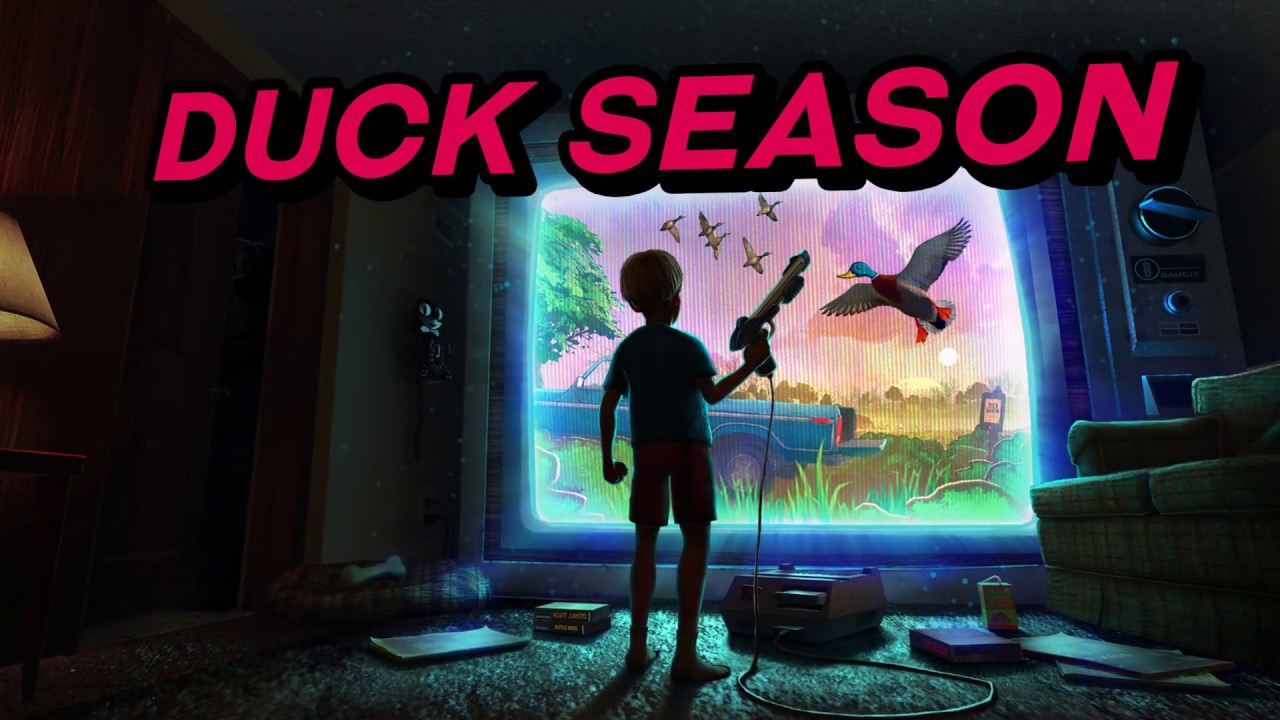 When I first logged into Duck Season on the HTC Vive, I felt a familiar nostalgia. While I wasn’t alive in the late 70’s, early 80’s – being a kid sitting down to a brand new rental is a mostly universal feeling.

Our story here starts with our young protagonist getting a one-rental of “Duck Season,” the hottest new game. While the world outside is full of adult problems such as murders and kidnappings, our character isn’t worried about all of that. He’s just a kid, enjoying his time, eating bananas and hanging out while his mom works.

(all those games on the floor are actually playable, as are the movies.)

Despite being much higher resolution than the original, real-world game, the “duck hunt” part of Duck Season is much like you’d expect. As for most VR games, the reloading is a more complicated process than “pressing R” or anything of the sort. You have to put both hands on the shotgun, and there is some skill to it. It’s overall pretty mindless and fun.

(As you can see, it’s pretty smooth.)

Here comes the hard part for me. Let’s just say that… if that’s all the game Duck Season VR was, would my review be any longer? No, it wouldn’t, would it? It doesn’t take too, too long of playing the game to realize that there may be more going on. Much like from a real child’s perspective, it can get easy to get lost in the game itself and forget to notice little details… important details.

(I don’t think he should be smoking, should he? This is a kid’s game!)

And if stuff like that isn’t weird enough, sometimes it can be very important to turn around and see what you might be missing.

I wish I could say more. I really, really do. I haven’t even seen it all yet, but suffice to say two things about this game: It’s an amazingly smooth, engaging, fun and thrilling VR experience. The other thing? Never let a kid play this game. Ever. It might look like it’s suitable for kids, but you’ll quickly find out it’s not.

Ultimately, I highly recommend this game to anyone playing Virtual Reality. It’s a highly memorable experience that will compel you to play it again and again to see the various endings. Again, don’t traumatize any children with it – it’s NOT a kid’s game!

Thanks for reading! If you want to see more, you can find my Twitch stream at twitch.tv/crimsonBZD – I play virtual reality and a wide variety of games. Fun and friends are more important than playing like a pro.

This article is just a glimpse of what I and VR have to offer. I plan on making more virtual reality videos and articles for you to enjoy. Thanks to my girlfriend @ChelzBZD for editing this thanks ya’ll!